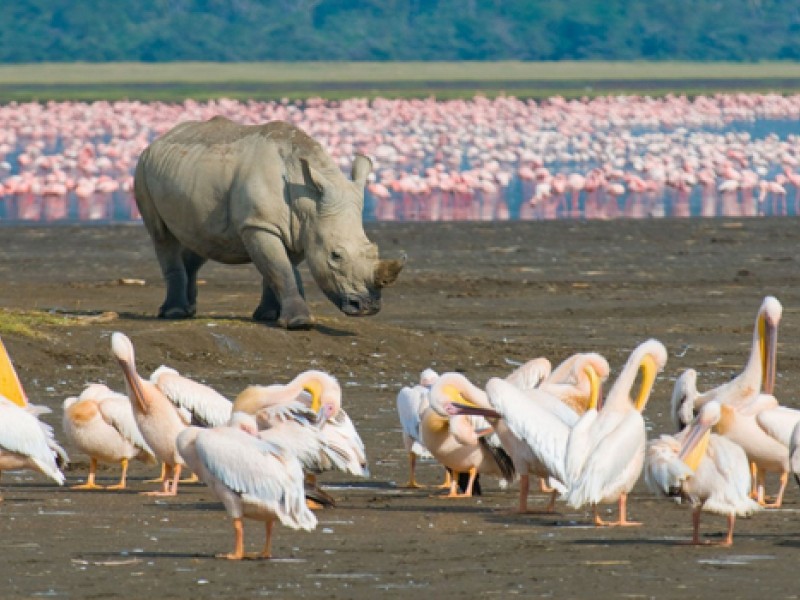 5 Days Budget Camping Kenya Safari Tours is a safari that takes you a long the Great Rift Valley viewing sceneries en route arriving to the Pink Lake often referred so due to it’s Great masses of Flamingos. A Lake Nakuru’s claim to fame is anchored on its flamingo’s and the over 400 species of birds found here.The lake itself is a soda lake on the floor of the rift valley. The sight of the at times millions of flamingos is quite spectacular. From a distance the lake appears ringed in pink.The Lake has also earned a reputation as an important haven for endangered species- particularly the Rothschild Giraffe and the black and white rhino. Lions, waterbuck, buffalo and baboons are all residents here. Maasai Mara is one of the biggest reserve that gives you a chance to see all the big five and the ugly five.

Day 2: Lake Nakuru to Masai Mara
We continue with our journey across acres of wheat and barley before reaching our next game viewing destination in the world most famous Masai Mara which plays host to the world greatest natural spectacle, the greatest dramatic wildebeest migration on earth which happens from July through October every year. We arrive at the tented camp and have lunch at leisure, before embarking on a thrilling evening game drive in one of the finest wildlife havens on earth. We then return back to the tented camp where it is time for dinner. Dinner and Overnight at either Lenchada Tourist Camp, Rhino Tourist camp or Mwangaza Mara Camp Meal Plan: Breakfast, Lunch and Dinner

Day 3: Masai Mara
After breakfast spend the day exploring Masai Mara with morning and afternoon game drives where we will have the opportunity of spotting the BIG FIVE including lion, elephant, leopard, rhino and buffalo. We will have an option of going out with picnic lunch boxes to spend the entire whole day in the park. We will also have the option visit to local Masai village at an extra cost or balloon ride at only $450 per person. Dinner and Overnight at either Lenchada Tourist Camp, Rhino Tourist camp or Mwangaza Mara Camp Meal Plan: Breakfast, Lunch and Dinner

Day 4: Masai Mara
Masai Mara is one of the best known and most popular reserves in Africa where wildebeest migration could be seen with roughly thousands of animals, at other times there are still hundreds. The plains are full of wildebeest, zebra, impala, topi, giraffe, and Thomson gazelle. Also regularly seen are leopard, lion, hyena, cheetah, jackal and bat-eared fox. Black rhinos are a little shy and hard to spot but are often seen at a distance.
Every July, August and September, the wildebeest travel from Tanzania Serengeti plains, northwards to the Masai Mara and the Mara River is the final obstacle. The wildebeest remain in the Mara between October and November. Between December and January the wildebeest gradually begin their migration back towards Serengeti plains in Tanzania.

Day 5: Masai Mara to Nairobi
Early morning game drive on sunrise when predators are active with morning hunt of big cats, we will have an opportunity to capture a Lion making a Kill as most of the time Lions Kills very early in the morning before sunrise.
We also experience the beauty of sunrise which reveals the backdrop of Masai Mara which means the dotted hills in Maa Language. We later return to the lodge for the main breakfast. After breakfast, we depart Masai Mara with the last picturesque of the MARA arriving Nairobi late afternoon. You will be dropped at either your hotel or airport to connect with your homebound flight depending on the arrangements where the safari ends. Meal Plan: Breakfast