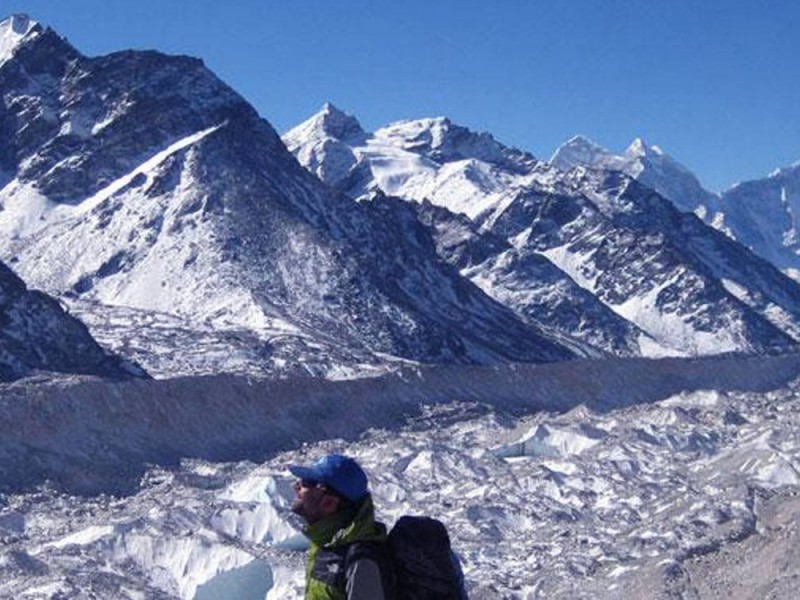 The Sagarmatha National Park has been a popular and one of the best destinations for the climbers and trekkers since the first south expedition to Mt. Everest in 1950. Trek is an adventure trek of Nepal which includes the crossing of the Renjo La pass (5360m), Cho-La pass (5420m), Kongma-La Pass,(5535m) and other attraction for the trekkers such as Gokyo Ri (5,360m), Fifth Lake in Gokyo valley, Kalapathar (5,545m) and Everest Base Camp (5,364m) . The amazing landscape views during the trek is unbeatable. More importantly, you should be physically fit to complete these passes. The three passes trek offers unique views of four giant mountains above 8,000m; Mt.Cho Oyu (8,201m), Mt. Makalu (8,463m), Mt. Lhotse (8,516 m) and Mt. Everest (8,848m). This trekking introduces us to the remote valley named as Nangpa La, monastery village of Thame and the Sherpa village of Marlung. We steep up all the way to Dingboche 4410 m for Kongma-La Pass 5535 m via Tengboche 3860 m. Khongma-La pass gives a lifetime memories of panoramic views of the spectacular Himalayas. Kongma-La Pass is the highest pass among these three passes with an altitude of 5535 m. From Dingboche, we again ascend up and after crossing Khongma-la via High Camp we reach to Lobuche 4910 m. From Lobuche, we continue our trek to Gorekshep situated at the height of 5140 m. Gorekshep is a junction point to Kalapathar and Everest Base camp. For the close and unbeatable view of Mt. Everest we take our way to Kalapathar. Later we descend through the same route to Gorekshep and from Gorekshep we take the ascending trail to Everest Base Camp through the once vast Gorak Shep Lake. Continuing the trek, we climb up toward The Everest Base Camp 5365m from where we can see the hazardous route of Everest i.e. Khumbu Icefall by which brave climbers pass through. From EBC we descend to Lobuche and we will chase to Cho-La pass 5420 m. This pass is the hardest pass among all three. It starts nearly from Lobuche Kharka and ends at Thangnak. On the way to Thangnag Kharka via Dzonglha 4830m we see the Awi peak 5245 m, Lobuche Peak, Nirekha Peak and many more. After exploring the places of Everest Region, our trek continues to Gokyo. Trek to the fourth and fifth lakes would be an extra attraction in Gokyo Valley from where the views are amazing. Then We climb the Gokyo Ri, The Gokyo Ri 5420 m is considered as the best viewpoint of the entire Himalayas in the Everest Region. Now, we ascend our way to High Camp through Renjo-La pass 5360 m. Renjo-La pass offers us a lifetime memory of panoramic scenery of Himalayan range. From High Camp, we descend all the way to Thame via Lungdhen 4380 m and Murlung 4210 m. Then we trek down to Lukla via Namche Bazaar making a circle to complete the 3 passes and trip in the Himalayas complemented by the hundreds of memories and a huge sense of accomplishment.