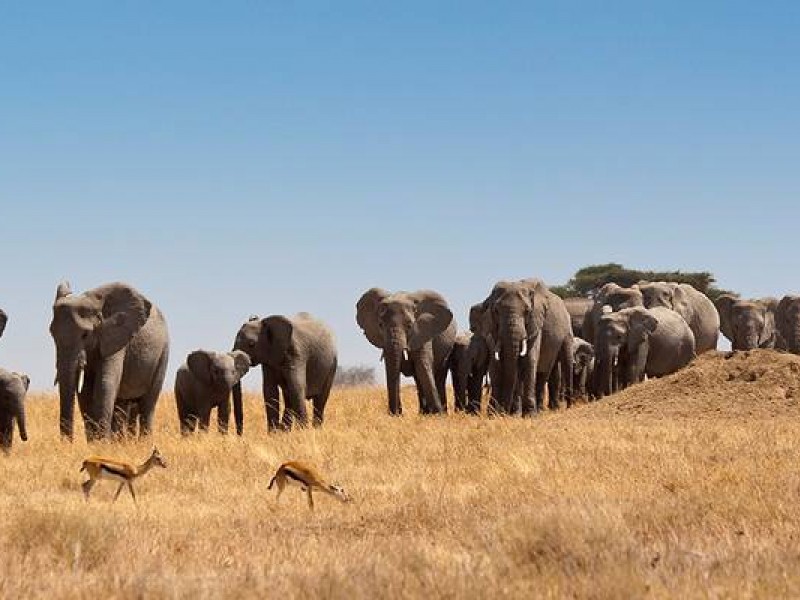 On arrival at Kilimanjaro international airport meet our representative & privately transfer to Planet Lodge in Arusha for overnight. Later our safari manager will come for detailed safari briefing & leave you to relax & enjoy the rest of your day at the lodge.

After breakfast at your lodge depart for Tarangire National Park via Arusha city for any last-minute purchase. The driving is along Masai steppe & villages, this park is located along the Great Northern Highway and it runs along with Tarangire river attributes and it is made up of small hills on the Great Rift Valley floor. Its main vegetation consisting of huge African Baobab trees and scattered acacia woodland and swamp areas in the south.

Tarangire River and the swamps are the valuable sources of water in the park and refugee area for a larger number of animal species during the dry season. The park is highlighted with some of the largest elephant herds in Africa. This park is also home to some rare animal species like Great Kudu, Fringed-eared Oryx, and the Ash Starlings.

After early breakfast “The private safari in Tanzania takes you to Ngorongoro Crater via the high lying farmlands of Karatu & many villages up to Ngorongoro gate, after park formalities drive up to Crater viewpoint 2,300meters for some nice pictures of the crater floor from the rim. Then descend 600 meters into the Crater floor for the nice game drive.

Ngorongoro Crater is a remarkable wildlife sanctuary and UNESCO’s World Heritage, the crater is sometimes referred by many as the 8th wonders of the world. As very few animals move in and out of the crater with its 600 meters high walls, you can expect to spot lions, leopard, hyenas, jackals, elephants, zebras, hippos & the rare black rhino. Many bird species can be seen in the crater-like flamingos, ibises, goose, ostrich & others. After lunch starts your way out & drive to Serengeti National Park (Option), on the way visit one of Masai village whereby some Masai warriors invite you & take you in & around their houses with some stories of their nomadic life around this area.

You will meet kids & other family members; you can ask any question & take pictures with them. Later they will sing a farewell song which involves dancing & jumping high. Afterward, drive further & reach Naabi gate in the late afternoon, after some park formalities start the sunset game drives in the Serengeti reach the central Serengeti during sunset.

You may also see some other predators coming back from their long night of hunting and some time eating or playing along the road. You may expect to see a lot of animal actions like fighting and sometimes killing. If the Wildebeest Migration will be in Serengeti you will spend much of your game drive following their movement. The late afternoon during or before the sunset drive back to the lodge for dinner & overnight.

After breakfast, you will have a Safaris in Tanzania game viewing at Serengeti National Park. The Serengeti, Tanzania’s largest National Park, covers nearly 6,000 square miles of grassland plains, Savannah, kopjes, hills, woodlands, and River line forest systems serve as critical water sources and are often excellent sites for wildlife viewing. Beyond the heralded migration of wildebeest and zebra, the Serengeti is best known for its big predators, including cheetah and Leopard, as well as large pride of Lions and clans of Hyenas and able to see the big 5. Dinner and overnight, Dinner and overnight Kati Kati Tented Lodge https://www.footslopestours.com/kati-kati-tented-camp/ or similar. All meals included.

After a relaxing morning and an early lunch, you will have early in the morning safaris in Tanzania game drive in Serengeti later back to the campsite for branch and hot lunch, Our driver and cook will load everything on the top of our safari jeep after then continuous with game drive while looking to be out of Serengeti to proceed to Ngorongoro. Today, you will be doing a Safaris in Tanzania game viewing en-route during your way from Serengeti National Park to Ngorongoro Crater. You will be in Ngorongoro Crater late in the evening where the night will be spent on the crater rim. Dinner and overnight will be at Ngorongoro Wildlife Lodge https://www.footslopestours.com/ngorongoro-wildlife-lodge/  or Serena lodge https://www.footslopestours.com/ngorongoro-serena-safari-lodge/ Rhino lodge https://www.footslopestours.com/ngorongoro-rhino-lodge/  or similar on request.

Day 7:  Safari in Tanzania in Ngorongoro Crater to Arusha

After breakfast, we depart for the descend down the crater for a Safaris in Tanzania for 5-6hrs game drive. In the crater, you can able to view the big5. See buffalo, giraffe, zebra and many more species, all set against the stunning backdrop of the Great Rift Wall. After the game drive in Ngorongoro crater, our driver will take back to Arusha for dinner and overnight at the hotel we booked for you.

Day 8: Transfer you to the airport

After breakfast in the hotel, we will transfer you to the airport whether at Kilimanjaro / Arusha airport. This will be the end of your  Tanzania family safari tour Packages with us.

What is not included

What to bring
• Clothes.
• A warm sweater as the nights can be chilly at high altitudes.
• Comfortable shoes, a pillow,  toilet paper, towels