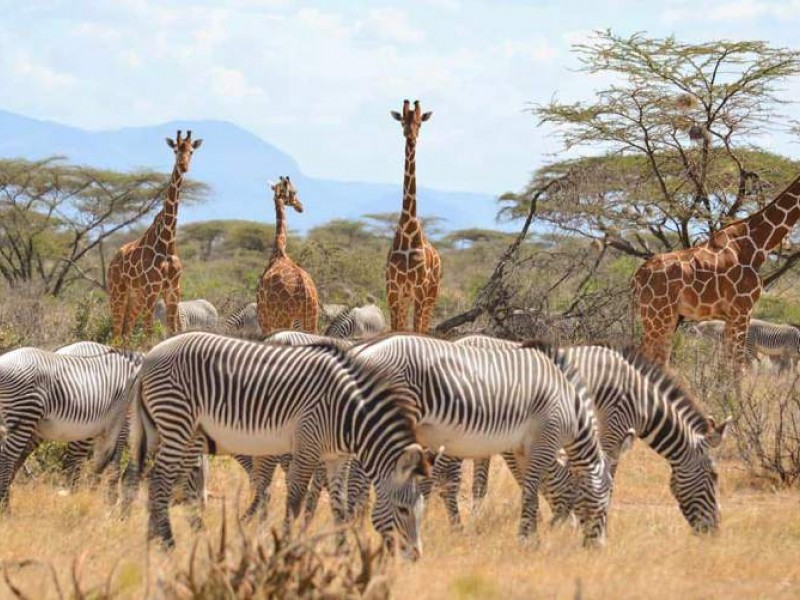 Lake Turkana camping safari is a 8 days tour to Northern Kenya that avoids the rigorous journey across the Chalbi Desert but still transverses rugged country to the frontiers of Kenya and the Lake Turkana.
Transport is by custom built four by four Land cruisers that seat 7 people and accommodation is in more up – market canvas tents that are ferried by purpose-built trucks and pitched in the middle of the African Wilderness to create a private camp with all the facilities of a luxury permanent tented camp.

Day 1: Nairobi - Samburu
Depart Nairobi and drive north to Samburu game reserve with a lunch and leisure break at Nyanyuki in mid afternoon. Samburu is north of the equator and contains rare, drought resistant animals species, which go for long periods of time without water. These include the reticulated giraffes, grevy’s zebra, the blue- shanked Somali Ostrich, the gerenuk or giraffe gazelle and the beisa orys, Rest of meals and overnight at the lodge or campsite..

Day 2: Samburu game reserve
A full day is spent viewing wildlife in the park. The reserve is reach in wildlife with fame for abundance in rare northern specialist species such as the Gravy Zebra, Somali Ostrich, Reticulated Giraffe, Gerenuk and the Beisa Oryx. The reserve is also popular with a minimum of 900 elephants. Large predators such as the Lion, Leopard and Cheetah are an important attraction. Traditional dancing is performed by Samburu tribesmen by the camp fire upon request.

Day 3: Samburu - Marsabit
Leave Samburu at 7.30 am for a long and dusty journey to Marsabit national park. We head north again along the Trans-African highway to Marsabit (meaning place of cold), an astonishingly cool, green and hilly oasis rising high above the dry heat of the surrounding desert lands. The local Rendille and Samburu people in their bright red outfits, beads and earrings make it a vibrant place. Dinner and over night at the camp

Day 4: Marsabit - Karacha
We depart after an early breakfast through the scenic landscape of the arid north with views of picturesque hills. We arrive and camp at Kalacha, a small Gabbra settlement on the edge of the Chalbi Desert.

The Gabbra are an Eastern Cushite people related to the Somali-Rendille in their historical origins in the southern Ethiopian highlands about AD 1000. The men wear traditional shorts and a blanket-cloak and the women wear a wrap-around and head cloth. They are pastoralist, particularly attached to their camels.

Day 5: Kalacha - Lake Turkana
We depart early crossing the Chalbi Desert to Lake Turkana which is the largest desert lake in the world and extends for 288 kilometers up to the Ethiopian / Kenyan border. It is surrounded by volcanic rock and desert. We arrive at our semi – permanent beach village where we have our traditional Turkana Huts; making it a perfect place to relax, protected from the scorching sun and heat characteristic of the climate of this remote area.

Day 6: Explore Lake Turkana
The day is spent relaxing and you may visit the local lodge to swim or hire a boat to visit the surrounding area (at an extra cost).
Turkana, formerly L. Rudolf is now named after one of the tribes who live on its shores and it is in this area that Richard Leakey uncovered the three million year old fossils of ‘Homo Erectus.’ This pre historic site is now known as the “Cradle of Mankind”. The Lake is also known as the “Jade Sea” because of its remarkable blue – green color.

The green color is as a result of algae particles, which shift with changes of the wind and light, so that the water surface shifts from blue to grey to fabulous jade. The lake is home to the largest population of Nile crocodiles in the world. If the weather permits we take a short sunset boat ride to the surrounding areas.

Day 7: Lake Turkana - Maralal
We depart after break fast via the Horr Valley situated between Mount Nyiro and Ol Doinye Mara viewing the breath taking scenery as we continue to climb on torturous, rocky hills to Maralal. Near Maralal is one of the most breath taking scenes in all of Kenya – the Losiolo escarpment, an endless stretch as land drops down to the Suguta valley.

Maralal is the official capital of the Samburu people and has a distinctly frontier feel about it, like something out of a ‘wild west’ movie. It boasts a colorful Samburu market and a game sanctuary that lies just outside of town. Maralal is also home of the Maralal International Camel Derby that happens once a year between July and October and attracts riders and spectators from the four corners of the world

Day 8: Maralal - Nairobi
Heading south again via Laikipia Plains and Nyahururu we may stop at the Thomson falls named after Joseph Thomson who walked from Mombasa to Lake Victoria in the early 1880s. Shaped by the waters of the Ewaso Narok River, the falls plunge over 72m into a rift, spraying the dark forest below. After lunch, we drive back into Nairobi by mid-afternoon.

–Transport in a 4×4 Land cruiser with a pop-up roof
– each person is guaranteed a window seat
– Services of a professional English, Spanish, German speaking guides
– Game drives as per the itinerary
– Game parks or national parks entry fees;
– Accommodations in camps/hotels mentioned on full board basis
– 1-liter Mineral water per person per day
– Complimentary return airport transfers in Nairobi